Garba (ગરબા in Gujarati) is a form of dance that originated in the state of Gujarat in India. The name is derived from the Sanskritterm Garbha (“womb”) and Deep (“a small earthenware lamp”). Many traditional garbas are performed around a centrally lit lamp or a picture or statue of the Goddess Shakti. The circular and spiral figures of Garba have similarities to other spiritual dances, such as those of Sufi culture. Traditionally, it is performed during the nine-day Hindu festival Navarātrī (Gujarātī નવરાત્રી Nava = 9, rātrī = nights). Either the lamp (the Garba Deep) or an image of the Goddess, Durga (also called Amba) is placed in the middle of concentric rings as an object of veneration.

Traditionally, the dance is performed around a clay lantern with a light inside, called a Garbha Deep. This lantern represents life; the fetus in the womb in particular. The dancers thus honor Durga, the feminine form of divinity.

Garba is performed in a circle as a symbol of the Hindu view of time. The rings of dancers revolve in cycles, as time in Hinduism is cyclical. As the cycle of time revolves, from birth, to life, to death and again to rebirth, the only thing that is constant is the Goddess, that one unmoving symbol in the midst of all of this unending and infinite movement. The dance symbolizes that God, represented in feminine form in this case, is the only thing that remains unchanging in a constantly changing universe (jagat).

The Garbha Deep has another symbolic interpretation. The vessel itself is a symbol of the body, within whom Divinity (in the form of the Goddess) resides. Garba is danced around this symbol to honor the fact that all humans have the Divine energy of Devi within them. Garba is now being appreciated worldwide.

Both men and women usually wear colorful costumes while performing garba and dandiya. The girls and the women wear Chaniya choli, a three-piece dress with a choli, which is an embroidered and colorful blouse, teamed with chaniya, which is the flared, skirt-like bottom, and dupatta, which is usually worn in the traditional Gujarati manner. Chaniya Cholis are decorated with beads, shells, mirrors, stars, and embroidery work, mati, etc. Traditionally, women adorn themselves with jhumkas (large earrings), necklaces, bindi, bajubandh, chudas and kangans, kamarbandh, payal, and mojiris. Boys and men wear kafni pyjamas with a Ghagra – a short round kurta – above the knees and pagadi on the head with bandhini dupatta, kada, and mojiris. There is a huge interest in Garba among the youth of India and in particular, the Gujarati diaspora.

Garba and Dandiya Raas are also popular in the United States where more than 20 universities have Raas/Garba competitions on a huge scale every year with professional choreography. Garba is also very popular in the United Kingdom where there are a number of Gujarati communities who hold their own garba nights and widely popular among the Gujarati community even in Canada, where the largest navratri festival in North America is held annually in Toronto. They say “Ae Hallo” for fun, which means “Come on! Lets start!”

Navratri (Hindi: नवरात्री Gujarati: નવરાત્રી) is a festival dedicated to the worship of the Hindu deity Durga. The word Navaratri means ‘nine nights’ in Sanskrit, nava meaning nine and ratri meaning nights. During these nine nights and ten days, nine forms of Shakti/Devi are worshiped. The tenth day is commonly referred to Read more… 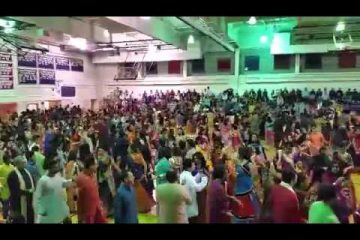 Raas or Dandiya Raas is the traditional folk dance form of Vrindavan, India, where it is performed depicting scenes of Holi, and lila ofKrishna and Radha. Along with Garba, it is the featured dance of Navratri evenings in Western India. During Navratri festival, in most of the cities of Gujarat and in Mumbai people gather and perform Garba dance. The word Read more…